The Mill Brook Community was conceived in 1933 and built during the 1940s as the Community of Green Acres. A part of this history was described in a paper written by Mill Brook resident Ellen K. Popper in 1994 entitled “Living With the Automobile: Variations on the Radburn Idea.” The following excerpt of that paper is published here with Ms. Popper’s permission. If you have information about the history of Mill Brook, please e-mail the Civic Association. The project was planned in 1933 by Clarence Stein, a town planner, for 350 acres of flat land on a former airfield in Valley Stream, just east of the New York City border. The plan, conceived as a method of ‘priming the pump’ to get the building industry going during the Depression, “was to provide dwellings for 18,000 people and &helip; to fulfill a primary objective of giving employment.” The project was never built, according to Stein, because “a large government is slow of action and its machinery complicated.” Three years later, Irwin S. Chanin, a powerful private developer who had built the Majestic apartment building on Centra Park West at 71st Street and the Century on Central Park West at 62nd Street announced plans to build Green Acres, a suburban development of 1,800 single-family homes – one-tenth the density of Stein’s plan – and a large shopping center on the same 350-acre site in Valley Stream.

According to the real estate section of The New York Times, it was Chanin, an architectural engineer, who worked out a comprehensive traffic system where pedestrian traffic would be served by footpaths extending through a park system, and residences would be built on short cul-de-sacs. The smallest possible number of streets would be provided “to serve the residents with the most convenience, but which would prove inconvenient to outside traffic.” The Architectural Record of October, 1936 featured a two-page spread on “Green Acres, A Residential Park Community” designed by Irwin S. Chanin as “A Community for the Motor Age.” As outlined in The Record, the plan called for 1,800 homes, five through streets and eighty-five private cul-de-sac lanes connected by short concrete footpaths to the general park system which would have a combined length of more than seven miles. Instead of a greenbelt surrounding the community, Chanin planned to widen and deepen the existing streams which formed natural boundaries on two sides of the site, and incorporate them into the park system. Playgrounds, a centrally situated school and space for civic and business centers and churches completed the plan. Of the original scheme, fewer than 400 houses, one through street and 20 cul-de-sacs were actually built prior to World War II. After the war, an additional four hundred houses were built, along with an elementary school at the center of the development. The pre-war section, still known as the “Old Section,” consists of Cape Cod, Colonial, English, and French manor designs.

In the newer section, the houses are ranches and splits, more typical of post-war Long Island suburban development. Although the cul-de-sac plan was not followed in the post-war section, there is only one entrance to the community on that side. Later on, blocks of two-story garden apartments and senior citizen housing were built on the north end of the community that abuts the Green Acres Mall. There is no access from the mall into the community. The mall has been enclosed and is nearly triple the size of the original shopping center built by Chanin. It is privately owned and is one of the busiest and most profitable malls in the country. As for the community, most people don’t even know it is there. Tell someone you live in Green Acres and they’re liable to think you mean the mall. According to Lieutenant Lawrence W. Mulvey of the 5th Police Precinct, which has the longest border with New York City of any Nassau County precinct, the Mill Brook community has one of the lowest crime rates in Nassau County, a fact he attributes to the layout of cul-de-sacs with limited entrances and through streets. Children play ball, ride bikes, and roller skate freely in the quiet streets. It is possible to walk along the greenbelt from any house in the Old Section to the elementary school without crossing more than one intersection. Low-rise multi-family units and senior citizen housing coexist harmoniously with single-family residences. Although it is only a fraction the size of what either Clarence Stein or Irwin Chanin envisioned it to be, in Mill Brook, has survived the test of time.

Pictures are worth a thousand words. Please enjoy our neighborhood photo slideshow. 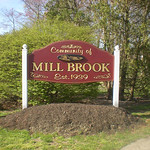